Life After The State, a guest blog by Dominic Frisby18th November 2013 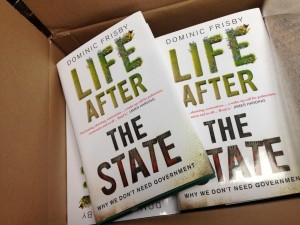 ‘Until August 1914 a sensible, law-abiding Englishman could pass through life and hardly notice the existence of the state, beyond the post office and the policeman’. So wrote AJP Taylor as the opening lines of best-selling English History 1914–1945.

19th century Britain was indeed a much more free existence than that of today. You didn’t need a passports (you could travel abroad without permission or ID), you could change money without restriction, taxes were paid on a modest scale (8% of GDP), there was no income tax, healthcare and welfare did not come from the state and education had only recently become mandatory and state-provided.

That all began to change in the early 20th century. First there were the social reforms of the Liberal Government of 1906-14, which saw the introduction of, among other things, income tax and national insurance – the birth of government welfare. Then came the most frightening and unnecessary state intervention of all, World War One. To pay for that war, the government abandoned the gold standard and the state took control of money.

With its control of money, and ever-increasing taxation, be it income tax, stealth tax or the tax that is inflation and the debasement of money, the state has not stopped growing. It has grown to the extent that now it looks after the birth of the baby, the education of the young, the employment of the man, the care of the elderly and the burial of the dead, to paraphrase economist Leon MacLaren. Can we not do all these things perfectly well ourselves?

As the state has grown, so have various gaps.

We have the wealth gap. The richest 400 people in the world are worth more than the poorest 140 million. The richest 1% of Americans control a quarter of the country’s income and half of its wealth. When once they earned twenty times, now CEOs of banks and major corporations earn a thousand times or more than low-ranking employees. 70% of the land in the UK is owned by less than 1% of the population. Most young people, in a quagmire of student loans, believe they will never own a house – the average age of the first-time buyer in London is now over 40. He or she’ll be a pensioner before he can start a family.

We have the health gap. The NHS was founded after World War Two to, among other things, reduce health inequality. The opposite has happened. Upsetting though many find this fact, health inequality, as measured by the life expectancy of the rich and poor, has actually grown since 1948.

And we have the opportunity gap. The intention of those who believe in the large state model is to bring about equal opportunity. I could not agree more with this sentiment. But the reverse has happened.

Spending at private schools is less than 10% higher per pupil than state schools (hard to believe I know but true). Private schools account for only 7% pupils. Yet private school students still dominate the top jobs in virtually every sector there is. Even in the Olympics you were five times more likely to win a medal if you went to private school.

For all the state intervention in the economy there has been, be it though subsidy, taxation, regulation or legislation, equality of opportunity has not been achieved.

There is a lot of anger and frustration at the moment. So much seems to be going wrong. The latest eruption came a fortnight ago with the Russell Brand interview.

But everyone is calling for the government to do more to fix this all. In my book I argue that the ONE thing government needs to do is LESS. Government action is the cause of so many of the problems that we have today. Government inaction is now key.

But there is one thing government needs to do.

Everything government does has been made possible by one thing: its control of money. The one thing we do need to do is separate money and state.

Until that happens, none of those things that are making people so angry will change. They will go on as before. Even President Obama, the most powerful man in the world, or one of them, elected in a tide of optimism, promised change. But all we got was more of the same.

I liken mankind in the West to a huge train, travelling fast. But it’s going to the wrong place. And nobody can stop it. It’s going too fast, it’s too heavy, it’s out of control. But some small reforms to our system of money, which can be implemented in a very understated way, without fanfare, can be the points on the railway that re-route the train.

What on earth am I talking about? Read Life After The State and I’ll show you.

Finally, I would like to express my sincere thanks to Robert Pocock. Life After The State was crowd-funded and Robert played a large and generous part in that. Without the support of the likes of Robert, this book would never have happened.

FYI Business Economics Ltd is delighted to be the frontispiece sponsor of Dominic’s book, and all our clients will receive a hardback signed copy.

If you would like to see more of Dominic explaining his “out-of-the-box” thinking then take a look at this excellent piece on the Max Keiser show.