Lemmings and the Cliff: The false obsession with GDP8th January 2013 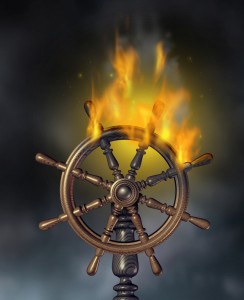 What a start to 2013! In the United States days were extended to fit political need, so that those looking to “sustain growth” could rejoice in the half-baked fiscal fudge that’ll last for a couple of months at best. In the UK doomsters have proclaimed that weakness in the service sector will undoubtedly lead to a “triple-dip” recession. Just think how many months of joy the media will have speculating and almost celebrating if that comes to pass!

Governments and established media focus unwaveringly on Gross Domestic Product (GDP) as their measure of growth, boom or bust; if it is rising that must be good, and if it is falling the chances of re-election will be gone. The reality is that our focus on GDP is not only farcical and unnecessary but also enormously damaging. Amidst all the calls for Governments to “do something” to keep GDP on an upward track, the predictors of GDP, the commentators on GDP and those wielding policy to influence GDP could all benefit from a long cold shower.

For too long there has been extraordinary weaknesses in national accounting. One country’s definitions vary from another, and when they are aligned it is usually to reduce transparency. This has created the opportunity for politicians to claim wonderful things, whilst ignoring the realities of, for instance, “off-balance sheet” commitments. In the UK unfunded public pension and PFI obligations mean that debt levels are much higher than publicly stated. Anyway, a polished spokesman for the Bank of England once told me that debt doesn’t worry him because the debt reports ignore assets, and if they were counted …

I take a different view, that debt matters. These varying debt totals are often expressed as a %age of GDP, with the UK’s Office for Budget Responsibility suggesting that its measure of Public sector net debt will hit 80% of GDP in 2016/7. The Economist, using different ways of analyzing the data, tells us that Public debt to GDP is already at 86.4%. I read a book last night that stated the real figure, with those unfunded obligations, is actually 244%. Despite their variances, these figures mean little to most; expressing debt per head, per employee or the interest burden per household would be far more meaningful.[1]

Those in business will be used to the phrase “Turnover is Vanity, Profit is Sanity”. I prefer to see Cashflow as the measure of sanity, but never mind because in our national accounts the focus is on Turnover. And that is insane.

So what is GDP? It is the sum of all expenditure on final goods and services (i.e. those not used up or transformed in a productive process). So this includes private consumption, business investment and government spending, plus exports less imports. As a measure of turnover that sounds reasonable enough.

Making up this turnover, or GDP, as individuals we generally buy what we want, and businesses invest where we want. Some of those Christmas presents that others bought for us may be unwanted and wasted, as were some of the contents of the overstocked fridge, but they count towards GDP because they are “final consumption”. But how can this be good for the economy, as we have over-consumed and under-saved, and have less money remaining to boost future consumption or productive investment.

When the UK and US Governments both provided a “cash for clunkers” scheme it boosted GDP. Great for the politicians, great for those who got a subsidized new car, and great for the few motor retailers whose job was temporarily saved. But did it really help the economy? And who carries the cost, because the cost isn’t counted in GDP.

We hear much about Government intentions on infrastructure. It seems logical that infrastructure must do wonders, return us to growth and boost jobs, until you think beyond the headlines. Over in Ireland they did lots of private building, but now there are too many unsold housing estates, and the few unfortunate homeowners who did buy on those near-empty estates are sitting on miserable losses. For a while the Irish building surge was great for their GDP, but it was the wrong thing for their economy, and the subsequent bail-out of the banks has taken their Public debt to GDP to 105.6%. Over in Japan two decades of boosting public infrastructure spending has taken bridges to nowhere to a new height, but even the Economist tells us that their Public debt to GDP is up to 211.9%.

We hear that the Irish are turning things around. We hear that in the UK our deficit is reducing. And surely that Japanese infrastructure must have done the trick? But the annual public debt burden in 2012 in these countries actually rose by 13.4%, 11.2% and 7.7% respectively despite all seeing rising GDP.

So when we are told that GDP measured recessions are upon us, or over, or triple-dipping, that’s not really the case, is it, because even when GDP is rising the turnover within the economy usually remains unable to sustain itself without continuing Government largesse. Too often recoveries are achieved by artificial or unsustainable boosts that have wasted capital that cannot be replaced. Worse, if this largesse is incurred as debt it raise the future burden that must fall on the country’s labour and capital.

Back in the 1850s the great French philosopher and economist Frederic Bastiat came up with the broken window parable. To précis it the shopkeeper had his window smashed, but the citizens rejoiced because this was great business for the glazier. What was unseen was the money that the shopkeeper had been saving, that could no longer be used for productive investment, and so he and the rest of the economy were now deprived of the economic choices he could otherwise have made.[2] Under our measure of GDP, rioting boosts GDP!

The Bastiat sketch illustrates the real problem with GDP; that it counts what is spent, not the value of economic improvement. The economy is a delicate balance between labour and capital, where the free market, if left to its own devices and pricing mechanisms, will create full employment of both labour and capital at an optimum return for both. Some love to proclaim that demand creates supply, so we need more demand. Others proclaim that supply creates demand, so we need more supply. Like the chicken and egg, to a certain extent both are true, so we need a delicate balance of both, but created by a free market.

Government produces little that consumers will pay for willingly, or that it is possible to put a realistic market price on, or that could not be purchased better elsewhere, and even some things that many would willingly pay money just to avoid. But Government spending, deficits, investment, call it what you will, boost GDP![3] No wonder politicians are so keen that we and they should spend, spend, spend, and this has encouraged them to apply a selective reading of Keynes to deliver increased government spending, whether or not private spending is rising or falling.

The clever fellow Kuznets, who developed the GDP standards used today, himself warned that “The statistician who supposes that he can make a purely objective estimate of national income, not influenced by preconceptions concerning the “facts,” is deluding himself; for whenever he includes one item or excludes another he is implicitly accepting some standard of judgement, his own or that of the compiler of the data.[4]

So GDP, whether including Government spending or not, isn’t an unfallable measure – so why do we blindly adhere to it? The economy comprises millions of individuals making millions of spending and investment decisions, and its health is definitely not just a GDP figure.

The great Austrian Economist Ludwig von Mises put it brilliantly: “The attempts to determine in money the wealth of a nation or of the whole of mankind are as childish as the mystic efforts to solve the riddles of the universe by worrying about the dimensions of the pyramid of Cheops.”[5] Q.E.D.

So why is this relevant to us now? The incoming Governor of the Bank of England, Mark Carney, has expressed interest in NGDP targeting. This means targeting GDP growth on top of inflation. And how can this most easily be achieved in the short-term, if individuals and corporations are seeking to improve their position by reducing their indebtedness, and being deprived of their capital by Government taxation? Well by more Government spending of course! That doesn’t sound like a sound prescription for the patient, and all because of the false obsession that is GDP.

[2] Bastiat is to my mind the outstanding economist. His books are short and full of common sense. In the future we will run a series of blogs on Bastiat’s writings.

[3] To be precise, some Government spending, such as welfare payments, is not counted in GDP, but is counted when it is finally spent by the recipient.

[4] Kuznets, National Income and its Composition, 1941